The tie is one of the most popular fashion accessories for modern elegant and dandy men, but do you know its history? Indeed, the tie has existed for a very long time. 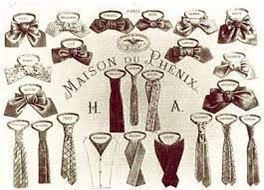 The supposed origin of the tie is attributed to Croatian horsemen who, at the time of Louis XII and Louis XVI, wore a fabric around their necks. This is where the word “Croatian” comes from today, but there is nothing absolutely certain about this.  What is certain is that these famous horsemen wore a richly decorated band of cloth around their necks, and that is all it took for our kings to adopt this fashion at court. The cravat had no trouble convincing people of its elegance but also and above all its originality. It was also extremely practical as it protected against the frequent draughts in the palace of Versailles.

This is a far cry from the first use of horsemen, who put it around their necks to protect themselves mainly from a fatal sword blow. The tie has sealed the Franco-Croatian friendship, so much so that the Croatian regiment of the Royal Tie, which operated in many military operations during the time of the French royalty, has always demonstrated its loyalty to the French people.  So much for the origin of the tie, a romantic story that is over 300 years old and that persists today, because the descendants of the Croatian horsewomen and the Royal Tie are still around today: The 10th cuirassiers regiment of the French army.

The cravat will thus make its entry in the wardrobe of the civilians at the beginning of the XVIIth century. It will be the substitute for the jabots and other laces. The tie was much more masculine and elegant, but also much less cumbersome! But lace was not abandoned, and the first ties made in France were finely decorated.  They were generally made of cotton or sometimes linen.

The tie of the time still does not have the shape that we know today, it is rather broad and is more comparable to a scarf, because it has the shape of a strip of fabric.

Louis XIV and the tie

Under the reign of the Sun King, the tie began to be embellished with small coloured ribbons to give it a little more fantasy. The king even created the profession of cravatier, which belonged to the services of the king’s chamber.

At that time, the cravatier had the status of a squire, he had to adjust the king’s tie, choose it, take it back, but also and above all match it with his highness’ clothes.

It was around the end of the seventeenth century that the so-called Steinkerque tie appeared for a few short years. This battle of August 3, 1692, in what is now Belgium, was fought between France and the Anglo-Dutch. Normally the tie worn on the buttonhole of soldiers is just tied around the neck. It is loosely tied and may be decorated with a coloured knot. This is usually reserved for ceremonies. There is a legend about the tie and the Battle of Steinkerque. It is said that during the bloody battle, the King’s Household and the Princes did not have time to tie their ties properly, so they appeared to the soldiers with a tie wrapped around their necks, untied, and the long side of the tie was passed through the hole in the buttonhole. After the battle, this legend is said to have endured and the fashion with it.

This fashion would not last long as it disappeared a few decades later in favour of the “Stock” tie, a simple tie with a black ribbon around the neck that also held the hair behind the head. This tie was widely used in the 18th century.

The tie during the revolution

1789 the French revolution put an end to royalty. But it did not put an end to certain fashion accessories, even if they were considered privileges. The French did not hesitate to wear a tie known as the “Garat”, a comedian who had worn it for a long time and thus popularised it. The tie was a great success at the time. But it was also very popular in the Western world, as in England, where it was worn at that time, in white with a series of knots.

Time goes by, fashion moves on and the tie endures. It will evolve over time, shape, colour, size and fantasy. The difficulty to tie it will remain for many years, it was generally sold already tied.

Modern history of the tie

1924 is a key date in the history of the tie. Indeed, it is the official birth of the mother of all ties. The famous New York tie maker Langdord had the genius idea of cutting his fabrics diagonally and assembling the tie in three parts: the front, the back, and the central fabric that would give the tie thickness and hold. This can be considered a major invention as the concept will never be changed again and will have the timeless look that we still know today.

During the 20th century, the history of the tie will accelerate because it is its advent. It is the obligatory fashion accessory. At the beginning of the 20th century, it was absolutely compulsory for all men. From Monday to Sunday, it would be unthinkable to go out without a tie and jacket. It was as much a part of a man’s outfit as his shoes, trousers and shirt.

From the 1920’s to the 1960’s, ties were extremely luxurious and rich, pure silk ties began to be available, new methods of making them were developed and a multitude of knots were invented.

In the 60’s to 80’s, a great number of different shapes were tested. The width of the tie increased to 15 or 16 cm (today the standard is between 8 and 10). The tie will not be the only male fashion accessory to widen during these years, since the collars of shirts, as well as trousers will see their extremities grow!

In the 1980s, the tie will become ultra slim (4cm), mainly worn by rockers and other Punks. It will also be coloured or fancy. There were also leather ties and the birth or rebirth of the knitted tie. The tie will be available in all materials, even the most original ones like pearls or wood. We dare everything! We also began to see the tie worn around women’s necks, as this fashion accessory considered highly masculine was used by women as an ideal fashion accessory for the working girl of the 1980s or as a sexy fashion accessory following the example of Madonna, who popularised it in numerous video clips.

In the 1990s, the tie was seen as a symbol of servitude to one’s company, associated with the collar and leash, and the obedience of managers in the company. It is statutory and used only on special occasions. It is the last fashion accessory for men that one will dare to wear, and we will see the appearance of many designs with tastes that would be considered “dubious” nowadays. Fluorescent ties, Simpson ties, ties with deer heads. But the 1990s, a period of economic growth and freedom, did not put an end to the tie.

Nowadays, the tie is a must-have in your wardrobe. It can be worn at work or at the weekend, or simply for an outing with friends. It will be made of silk, rather slim, 7 cm wide. It is the businessman’s tie, worn every day. Preferably in a solid colour.

The history of the tie has made a comeback. It is modern and sexy at the same time. All ages wear it. It is preferably slim and plain, but we note the strong breakthrough of ties with a “tartan” pattern in the early 2012s. All modern and dandy men wear one. There is a strong demand for original bows and it is widely popularised. Prices range from 10 to 100 euros. The choice of materials is incredible, as is the choice of shapes and textures. Today it is the symbol of the modern dandy.

A nice video about the origin of neckties: